Places To Visit In Sikkim During Winter

Who does not agree to the fact that every season of the year is a great time to visit the Sikkim valley? However, winter brings along a different kind of vibe in the region and makes your holiday experience worth it. The snow-clad mountains, frozen lakes and barren lands have its own rugged beauty and you will see the glistening white snow blanket on all its green meadows.

Hence, we have carefully curated a list that presents the top-most locations you must hit if you are planning for a trip to Sikkim in the winters.

Top Places To Visit In Sikkim During Winter

Also known as the Changu Lake, this water body set at an altitude of 12,300 ft. is held in great reverence by the Sikkim’s local people. The surface of the lake reflects different colours with the change in seasons. During winter, the fall of snow makes the surrounding look even more blissful. That is why it is one of the prettiest places to visit in Sikkim during winter.

Entry fee: There is no entry fee to visit this sightseeing spot. However, since falls under a protected area, all tourists will require Protected Area Permits.

Popular tourist attractions in and around Tsomgo Lake: Migratory ducks like the Brahmini along with Yaks and ponies ride, the beautiful flowers such as Blue and Yellow Poppies, Primulas and Irish and Baba Mandir.

How to reach: It is located at a distance of 35 km from Gangtok. A cab ride from the city will take 3 hours for you to reach the Tsomgo Lake. It is 130 km. away from the New Jalpaiguri railway station and Bagdogra is the closest airport from where a 4-hour drive will take you atop.

Untouched and unalloyed, this monastery is the largest in the state and one of the must places to visit in Sikkim during winter. Set at 4500 ft., it provides for pure calmness to those who do not want to be part of the busy city life and are looking for a rather relaxed getaway.

Popular tourist attractions in and around the monastery: Backdrop of majestic mountains in the surrounding and a gushing river flowing below

How to reach: It is located at a distance of 23 km from Gangtok. A cab ride or city bus will take approximately 2 hours for you to reach the monastery. Bagdogra is where you land if you wish to fly in the city which is 124 km. away. Siliguri is the closest railway station to the monastery.

One of the highest freshwater lakes of the world, the Gurudongmar Lake is set at a striking altitude of 17,800 ft. and is a partially frozen wonder. Even though such a height experiences harsh winters with snow, what is enchanting is that its deep blue waters never freeze completely, even in sub-zero temperatures. Entry fee: There is no entry fee to visit this sightseeing spot

Popular tourist attractions in and around Gurudongmar Lake: The temple dedicated to Guru Padmasambhava and also the Indo-Tibetan border Marked by a golden top dome, the exact land where the stupa stands were believed to be haunted by evil spirits in the past. A very celebrated lama of Tibet Trulshig Rinpoche built this stupa to drive away the spirits in 1946. Do not miss out on seeing the Kanjur holy books, various relics and inscribed mantras on the walls.

Popular tourist attractions in and around Do Drul Chorten: Institute of Tibetology is at a walking distance from here

How to reach: It is set at 2 km distance from Gangtok. You can arrive at Bagdogra airport or the New Jalpaiguri railway station and drive for an hour

Replete with natural wonders and picturesque beauty, the Yumthang valley is the best place to visit in Sikkim during winters. It can be captured with a clear sky and snow-capped mountains in winters. You will spot man lush forested landscapes, waterfalls coming down the rock faces and scenic views all around.

Entry fee: There is no entry fee to visit this sightseeing spot

Popular tourist attractions in and around Yumthang: hot springs to ease your body muscles of the extreme cold

How to reach: It is set at a distance of approximately 120 k from Gangtok if you are driving down. A 7 hours drive approximately will take you to the valley and then you need to drive further up till Zero Point. The nearest railway the station is the New Jalpaiguri station and Bagdogra airport is the closest. Perched at an astounding height of 5600 ft., Kaluk is a pictorial village that will seem like frozen heaven. The small town holds importance in cultural, historical and religious aspects of the state and it is declared as the Eco-tourism thrust area of Sikkim. It is known for being among the windiest places in Sikkim which only adds to its winter ecstasy.

Entry fee: There is no entry fee to visit this town

Popular tourist attractions in and around Kaluk: Majestic views of Mount Kanchenjunga and the Gurung Monastery, Varsey Rhododendron Sanctuary

How to reach: Drive from Bagdogra airport to Pelling or from New Jalpaiguri Railway Station (1.5 hours approximately) and then further up to Hee Bermiok

This is one of the oldest and the most significant monasteries of Sikkim. It gives all its visitors a perfect place to relax and unwind in solitary and get lost in the distinct sounds of nature. You can also witness the riveting beauty of the Himalayas as well from here.

Popular tourist attractions in and around Pemayangtse Monastery: The town of Rabdentse

How to reach: Cover 110 km from Gangtok via cab, which will take you to the monastery. The closest airport is Pakyong Airport and the closest railway station is Siliguri One of the most sought after locations of South Sikkim, Ravangla stands for the nature lovers and adventure freaks beating heart. The town stands at an elevation of 7000 ft. and that says a lot of the views it may have during the snowy winters. This tourist town is the perfect place to laze around wrapped in a blanket with a cup of steaming coffee and enjoy the best backdrops of Sikkim.

Entry fee: There is no entry fee to the town; however, the sanctuaries and museums have their individual listed entry fees

How to reach: It is directly accessible from the city of Gangtok (2 hours drive approximately). You can also reach Namchi and then hail a cab from there

Drive through one of the highest motorable roads in the world as you traverse Nathula Pass. Plush Himalayan forest and colossal mountains surround the narrow winding hilly roads which give more thrill to the entire journey. Winters makes the alpine flora even more enthralling and you will be able to see Chinese soldiers lining the border on the other side.

Entry fee: There is no entry fee however it costs approximately INR 1000 per person to ride in an authorised tour operator’s cab which is the only vehicle that is allowed here

How to reach: The only way to reach Nathula pass is for you to drive from Gangtok. Only Indian nationals with a valid permit can visit here 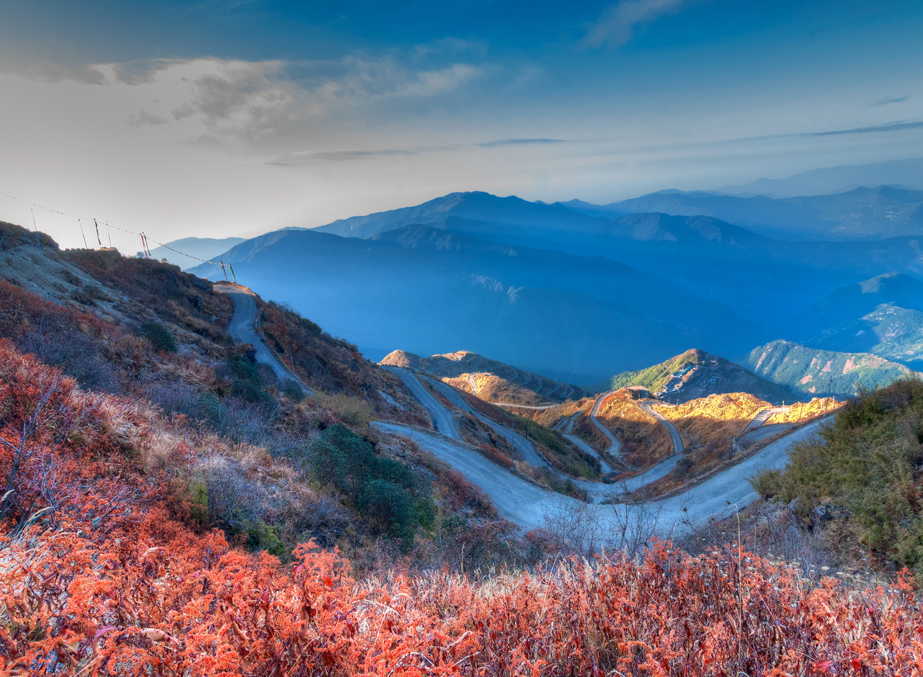 Winters are portrayed by a mesmerizing snowfall in Zuluk. Set on the rugged terrain of the lower Himalayas, it is relatively an offbeat and emerging destination in Sikkim. The uproar of hues that are seen here look much the same as what would be in heaven.

Popular tourist attractions in and around Zuluk: Thambi View Point, Lungthung and Tukla

How to reach: From Bagdogra airport or NJP railway station, get on National Highway 10 and go up to Rangpo. It is about 150 km. and takes a 5 hours drive to reach Zuluk

So pull out your woollens and pack your jackets, for the frosty winters await your presence in Sikkim. With our team of travel experts, you will get the opportunity to get smitten by the astonishing beauty of the place, all at a reasonable rate. Our Sikkim holiday travel packages are the one-stop solution for the needs of all the tourists in the Himalayas. So get in touch with our travel agents and let them chalk out the perfect winter getaway in Sikkim for you, your family and your friends.