Sikkim Weather in May Spring and summer blend into each other during the month of May in Sikkim. The flowering season reaches its peak with clear blue skies and plenty of sunshine at the beginning of the moth. By the second half of May, fog and sun begin their game of hide and seek—a sign of the soon-to-arrive monsoons. A sunny day might get shrouded in mist as suddenly as a foggy day transforms with a sudden burst of sunshine.

May is often considered to be one of the best months to visit Sikkim. Witness the fascinating effect of the ever-changing yet pleasant weather conditions in this part of the Himalayas is an experience of a lifetime. Soak in the beauty of the rhododendrons in full bloom at Barsey Rhododendron Sanctuary or navigate rapids in the gushing waters of Teesta on a raft—there is plenty to do in Sikkim in May. In fact you will be spoilt with choice.

The festival of Saga Dawa—one of the most widely celebrated in Sikkim—also falls in the month of May. Celebrated in the 4th month of the Tibetan Lunar Calendar, on a full moon day, Saga Dawa marks the day of Buddha’s birth, enlightenment and nirvana. Monasteries around the state celebrate the day with great fervour every year. A procession of monks from local monasteries carries sacred scriptures around the town for people to receive blessings. 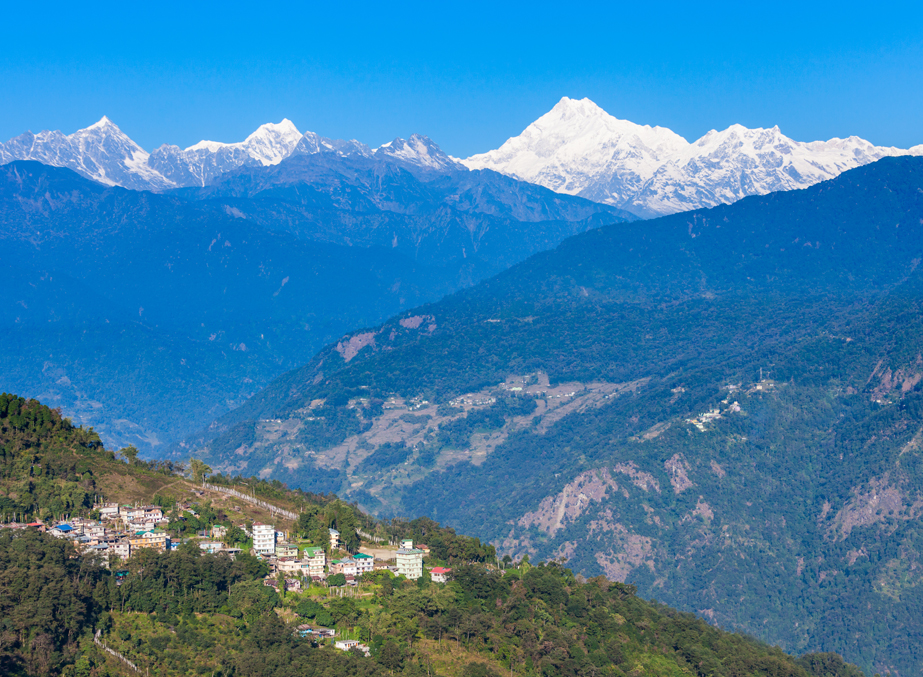 Temperature ranges from 5°C to 18°C in Gangtok during the month of May, making it perfect for enjoying the great outdoors. Start with the dazzling International Flower Show in the heart of the capital near Whitehall. Sikkim is known around the world for its rare species of orchids and rhodendrons and many of them will be display during the festival that runs through the spring months. If you are an early riser and happen to wake up on a clear day, head to Tashi View Point to begin your day by watching the sun rise from here. The facing hills nestle the Phodong and Labrang monasteries amidst dense forests and the view of Kanchendzonga behind them is nothing short of brilliant. In case you miss sunrise, you can catch the equally gorgeous sunset from here on a clear day. On the way to Tashi Point or on your way back stop at the Bakthang Waterfall. The cascading waters with the surrounding hills make for a lovely sight.

A trip to Sikkim would obviously be incomplete without visiting the Rumtek Monastery. Located about 24 km away from Gangtok, Rumtek is one of the grandest monasteries in the entire state and is the headquarter of the Black Hat sect of Mahayana Buddhism. Overlooking the city of Gangtok, on a facing hill, the monastery is a prime example of Tibetan Buddhist architecture. It also houses some of the most important sacred texts of the Karma Kagyu sect and the interiors of the prayer halls are festooned with some of the most brilliant thangka paintings you will ever see.

About 31 km from Gangtok is the Kyongnosla Alpine Sanctuary. With boundaries extending right up to the fringes of Lake Tsomgo, the sanctuary is replete with majestic silver firs, junipers, flowering rhododendrons, multitudes of wild orchids along with a number of endangered species of wild animals.

From Kyongnosla, continue up to Lake Tsomgo which is about 33 km away. Located at a height of 12,000 feet, this sacred lake changes colour every season and remains frozen during winter months. The surrounding forests are alive with flowering rhododendrons, primulas and other wild flowers in May, making for a splendid sight. About 16 km from Tsomgo is the well-known Nathula Pass, a stone’s throw away from the Indo-China border—a reminder of the times when the Old Silk Route flourished. Don’t miss the Baba Harbhajan Singh Mandir while you’re here. The shrine is dedicated to a martyred soldier who is supposed to protect the Indian army from harm. Once you’re done exploring Gangtok, head north to the tiny mountain village of Lachung. About a 5 hour drive from Gangtok, Lachung is perfect if a quiet getaway is what you have in mind. Weather remains pleasant throughout the month of May as temperatures range between 8°C to 20°C. Walk through the little hamlet and visit the 168 year old Lachung Monastery. Stay overnight and head to Sikkim’s very own Valley of Flowers, early morning on the next day. Also known as Yumthang Valley, it is about 25 km away from Lachung. The entire valley is densely covered with a variety of rhododendron trees, all of which are in full bloom during the month on May. The sight is surreal to say the least. To visit these places however, you will need protected area permits which can be obtained from tourism office in Gangtok. 23 km further up from Yumthang is Yumesamdong, popularly known as Zero Point. The road comes to a literal end here and the journey might be arduous but once you step out of your vehicle you will know why it is worth the effort. Located at a staggering height of 15,000 feet, the area is covered in snow all year round. The view of two meandering rivers as they meet in the valley below surrounded by snow-clad mountains is mesmerizing.

Head 47 km west of Lachung and you will reach another picturesque hamlet called Lachen. Passionate trekkers often prefer to make the entire journey on foot since trekking allows for some spectacular views that you might miss if you’re in a vehicle. Lachen also serves as the base for some of the most spectacular treks in North Sikkim including the Green Lake trek and the Chopta Valley trek. A three hour drive from Lachen will bring you to the breathtaking Gurudongmar Lake. Located at an altitude of 17,800 feet, it is one of the highest lakes in India. If you’re in the mood for some more exploring, head to South Sikkim. The city of Namchi, about 80 km away from Gangtok, serves as the capital of South Sikkim. May is a great time to visit since temperatures stay in the pleasant range between 14°C to 23°C. Apart from the world’s largest statue of Guru Padmasambhava (guardian deity of Sikkim) at Samdruptse Hill, there are a number of attractions in and around Namchi like the Namchi Rock Garden, Ralang Monastery, Ngadak Monastery and the Maenam Willife Sanctuary.

Your holiday in Sikkim would be incomplete without visiting the state’s western region. About 113 km from Gangtok and 75 km from Namchi, Pelling acts as the base for exploring the enchanting West Sikkim. The weather in May is perfect with temperatures ranging between 16°C to 24°C. Visit the 300 year old Pemayangtse Monastery, merely 8 km away. The monastery belongs to the Nyingma sect of Tibetan Buddhism. A walking distance from the monastery, the Rabdentse Ruins of Sikkim cannot be missed while you’re here. An enchanting walk through a chestnut forest will take you to this 16th century capital of the erstwhile kingdom of Sikkim.