Places To Visit In Bhutan Bhutan, the last Himalayan Kingdom, is a country where you would find happiness prevailing across! Sharing international boundaries with India and China, this picturesque piece of heaven is shrouded by the mystical Himalayas, cuddled with pictorial plains and magical sub-alpine mountains. Amidst all these miraculous beauties, one would find a range of scenic places to visit in Bhutan.

Spread across 47,000sq.km, Bhutan has something for everyone! If you are on the lookout for romantic getaways, you would find Bhutan tourist places the most lovable ones. For thrill seekers, the mighty Himalayas (7,000m) and its rugged terrains would surely offer an adrenaline rush! For nature lovers, the picturesque places in Bhutan will do eternal justice. Well, if in case, you are thinking about taking a trip to this happiest kingdom, here is a list of most magnificent places to visit in Bhutan: The capital city of the country, Thimphu (previously called Thimbu) is undoubtedly the first place to visit in Bhutan. Situated towards the western-central region of the country and on the banks of gushing Raidak River, this city is dotted with scenic vistas and mountain peaks that reaches 2,000-3,800m.

A city that showcases the indigenous cultures and traditions of Bhutan in the most splendid ways, Thimphu also boasts of being the commercial centre of this happy kingdom. The official residence of Bhutan’s royal family, this beautiful city has an abundance of luxury stay options, tourist attractions, places to see in Bhutan, and other modern facilities.

Best Time to Visit: March to May 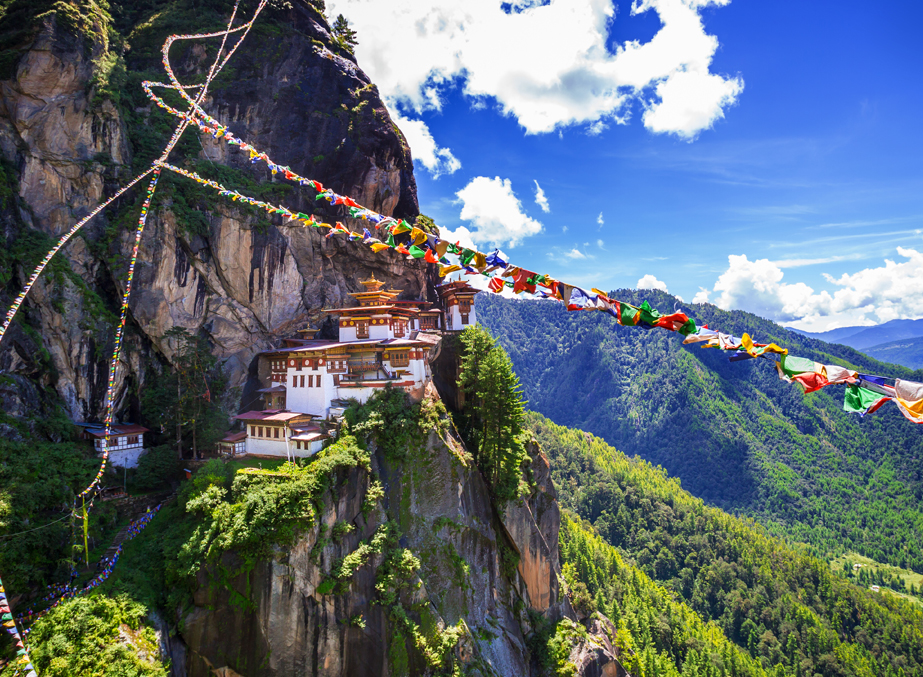 A city studded with glorious history and numerous sacred sites, Paro Valley is often revered as the ‘Last Shangri-La’ on earth! One of the most wonderful places to visit in Bhutan, this district is a vibrant mix of natural beauty, rich cultures, semi-modern lifestyle, and colourful traditions.

Flaunting its meticulous beauty from the confluence point of Paro Chuu and Wang Chuu rivers to the towering Mt Jomolhari, Paro is the home to the much-acclaimed Taktsang Monastery or the ‘Tiger’s Nest’. To mention here, this valley is also famed for its famous terraced farming and ‘red rice’ cultivation.

Weather: Summer (June to August), Winter (December to May), Monsoon (September to November) The once a capital of Bhutan, Punakha Valley is one of the most scenic year-round places to see in Bhutan. Home to Punakha Dzong – The Palace of Great Happiness or Bliss, this Himalayan marvel is seated at a height of 1,200m, and proves to be a serene tourist attraction in the entire country.

Tucked away amidst Pho chu and Mo Chu rivers, the Punakha Valley is around 3.5 hours’ drive away from Thimphu and can be easily reached from across the country. Pleasant climate, bountiful beauty, warm locals, and the diverse Buddhist culture and traditions make this valley a must visit place in Bhutan.

Weather: Summer (July to September), Winter (October to April), Monsoon (May to June)

Trongsa – The Balcony of Bhutan Positioned on an elevated hilltop, the town called Trongsa is known for its scenic beauty and panoramic views. Owing to its topology, this pictorial place to see in Bhutan can also be called as the ‘Balcony of Bhutan’! Magnifying the enchanting charm of this town, there is its rich history, traditional white-washed buildings and colourful plants spreading all across its perimeter.

Visitors often throng this place to enjoy panoramic views of its surrounding valleys and the magical mountainous glimpses. Among the many attractions in this quaint town, the Trongsa Dzong that resembles as a flying dragon, serves as a major attraction. To mention here, the dzong is estimated to be built in 1648!

Bumthang or Jakar Valley – The Switzerland of Bhutan Enriched with the charm and splendour of evergreen mountains, Bumthang or the Jakar Valley if fondly called as ‘Little Switzerland’! Well, even though you may not find the scenic Swiss Alps here, you can surely savour the delicious ‘Swiss Cheese’ while touring around the magnificent Jakar Valley; thus, it got its name.

Located in central-eastern part of the country, Bumthang can easily surpass any of the places to visit in Bhutan with its bountiful beauty and natural marvels. Jakar’s rugged terrains and challenging trails also earned it a fame among the adrenaline seekers. Whether outdoors or indoors, you would surely like every bit of this valley. One of the most enchanting places to visit in Bhutan, Phobjikha Valley is a treat to every visitors’ eyes! A glacial valley, this is also the place where one can find the rare black-necked cranes in abundance. Unique from the rest of the Happy Kingdom, the valley showcases heart-warming cultures and is adorned with rich faunal biodiversity.

Resembling much to the shape of a bowl, the grace of Phobjikha Valley is further enchanted by the great Black Mountains and endless expanses of evergreen fields. Irrespective of which month or season it is, one can always expect a surreal and serene experience in this valley; all these surely makes Phobjikha Valley one of the most sought-after places to see in Bhutan.

Mount Chomolhari – Bride of the Kangchenjunga Guarding the borders of Bhutan, the Chomolhari Mountian (also called Jomolhari Mountain) is a part of the great Himalayas. Rising around 2,700m above the ground level, this enthralling mountain is affectionately called the ‘Bride of the Kangchenjunga’ due to its proximity with the latter.

A sacred site among the Buddhists; mostly the Tibetan Buddhists, legends have it that it is the abode of Goddess Jomo, who is believed to be the protector of Happy Kingdom. Chomolhari Mountain remained unclimbed until 1924 as the folklore said that anyone trying to scale this sacred mountain will be thrown or pushed down. However, it has now become a hot-spot among the trekkers and thrill seekers alike. Even if you don’t wish to climb Mount Jomolhari, you must not miss the chance of having a close look at it! Settled at a breathtaking height of 28,000ft, Wangdue Phodrang is the second largest and one of the most surreal places to visit in Bhutan. A scenic display of how soulfully cultures meet and greet nature’s untouched beauty, this second largest district of the Land of Dragons is also expected to get enlisted as an ‘UNESCO World Heritage Site’ soon.

Dotted with an array of tourist attractions, Wangdue Phodrang is offers a unique mix of subtropical as well as cool and snowy climatic conditions. Thus, it has earned an unmatched reputation among visitors searching for wonderful places to see in Bhutan.

Weather: Summer (June to August), Winter (December to February), Spring (March to May)

Jigme Dorji National Park – The Wild Side of Himalayan Kingdom Spread across the length and breadth of Gasa District and some parts of Thimphu, Paro, Wangdue Phodrang, and Punakha, the enthralling Jigme Dorji National Park at 1,400-1,700m, is a natural home to many endangered and rare wildlife species. Flaunting its irresistible beauty across 4,315sq.km, this reserved area is also a tough contender name in the list of ‘UNESCO World Heritage Site’.

Home to more than 30 wildlife species, the park also has several cultural sites within its perimeter. On a visit to Jigme Dorji National Park, one can easily spot Bengal Tiger, Snow Leopard, Takin, Clouded Leopard, and Himalayan Blue Sheep are some of the dominant inhabitants of this park. It also houses more than 300 different species of birds and an array of rare floral species. Jigme Dorji National Park has also become a favourite ground for trekkers opting for Jomolhari Trek, Snowman Trek, Lunana Trek and Gasa-Laya Trek.

Phuentsholing – The Gateway to Bhutan Located at the foothills of the great Himalayas and sharing border with an Indian town called Jaogaon, Phuntsholing or the ‘Gateway to Bhutan’, is a must visit place in the list of best places to visit in Bhutan! Owing to its proximity to the Indian territory, one can always expect a mix of crowd in this magnificent town. However, the town resonates Bhutan’s unique cultures and tradition in the most vivid ways.

Located around 5-6 hours’ drive away from Thimphu and Paro, visitors from India, Bangladesh, and Maldives can reach this scenic town without any tourist visa. However, while crossing the border, national of these countries need to show valid ID proofs and seek entry permission.