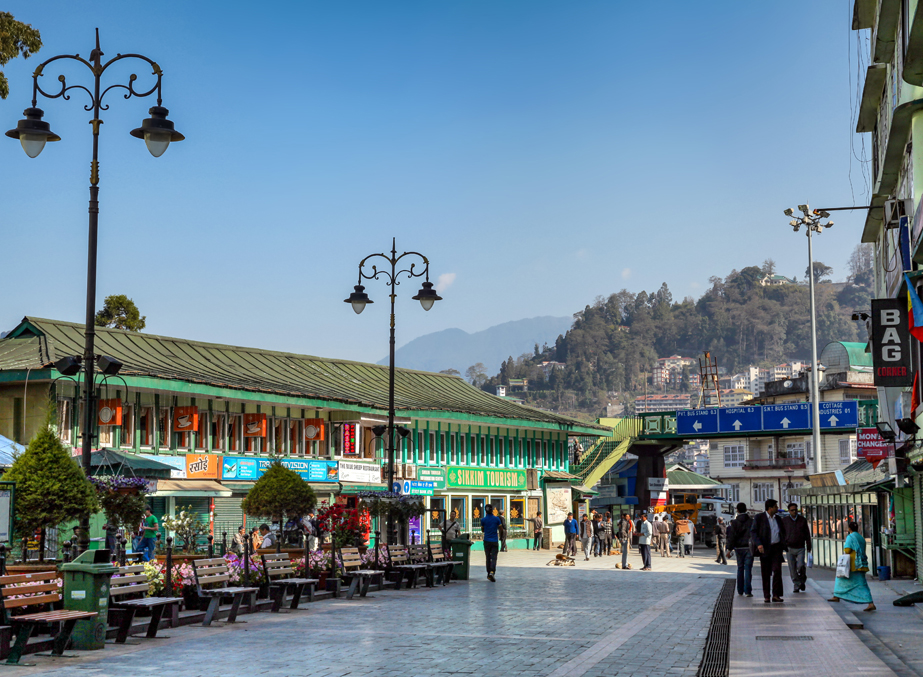 The advent of autumn transforms Sikkim into a red and gold painting of trees, with crystal-clear skies and the hint of oncoming winter. It’s not surprising that October is a popular month for a traveller’s Sikkim adventure. October is Sikkim’s “second spring”, where every leaf is as beautiful as a flower.

The Autumnal Gold and Glory of East Sikkim

Gangtok(5,840ft), Sikkim’s capital, should be your base for exploring the eastern region of this mountain state. The city’s temperature varies between 11-16°C, making for cool days and near-chilly nights. The Buddhist temples and natural attractions around Gangtok offer sprawling views in October.

Gangtok is a busy city, but a calmness envelops you once you enter the hallowed grounds of the Tsuklakhang Royal Monastery. Statuettes of Tantric deities and various forms of Buddha line the altars of this palatial monastery near Gangtok’s Flower Exhibition Centre. 23kms from Tsuklakhang is the Kagyu sect Rumtek Monastery, past golden autumnal fields. Situated on a 5,500ft hillock, one can take in a clear view of Gangtok’s rooftops, glistening in the October sunshine, from this gompa’s grounds. Phodang Monastery(4,500ft), built in the 1700s, should be visited for its rare frescoed paintings. The temple is 40kms from Gangtok and is popular among devotees and travellers for its place in Tibetan Buddhism. The October traveller shouldn’t leave eastern Sikkim without planning a day trip to Nathu La Pass, 60kms from Gangtok. With the passing of the rainy season, this mountain pass, at 14,140ft, is beautiful in the slanting rays of the sun. Once an important offshoot of the Silk Route, this pass connects India with Tibet, and October offers clear views of the mountains and high-altitude vegetation.

On your way to Nathu La, make sure you stop at the glacial Tsomgo Lake(12,310ft). Also called Changu Lake, this waterbody is surrounded by snow-clad mountains and the clear sky is reflected off the waters. 40kms from Gangtok, this oval-shaped lake is best explored from the ropeway that offers an aerial view.

As you drive away from Changu Lake you will reach the famed Baba Harbhajan Singh Mandir, 15kms away. At 13,000ft, this is one of the highest shrines in the country, and its cultural significance is heightened by the legend surrounding it. Harbhajan Singh was a soldier who died in battle. The army personnel stationed at the Sino-Indian border believe he protects them from harm. Whether you choose to believe the legend or not, Baba Mandir is situated among the clouds, with stunning panoramas of the surrounding mountain-scape.

Since Nathu La Pass, Changu Lake and Baba mandir are high-altitude destinations make sure you carry a winter coat. The temperature is much lower than what you’d experience in Gangtok.

October is the ideal month to explore the elevated sights of north Sikkim. The pristine skies allows travellers rambling views of the surrounding mountain-scape. If you’re exploring north Sikkim in October, you will sense the breath of winter in the air. The mountain town of Lachen(8,800ft) is a podium for nature’s autumnal performance. The trees come alive in amber and orange while the peaks are covered with snow. As you explore Lachen, the October views will make you want to extend your stay. This hamlet is 108kms from Gangtok and the temperature hovers around 5 to 15°C.

Gurudongmar Lake is Sikkim’s largest lake and one of the highest in the world. From Lachen, your journey starts in the early parts of the morning and the 67km drive is spellbinding because of the steep climb, alpine trees and changing light. Gurudongmar Lake is situated at 17,000ft and offers travellers unparalleled views of Mt. Sinolchu and Kanchenjunga. Since October comes with cloudless skies, this trip will be memorable to say the least. The temperature here varies between -5 to 3°C. Another picturesque northern town is Lachung(9,000ft), two hours from Lachen. Take in the views of the tributaries that meet in this town, and go on to feed the mighty Teesta. The temperature here is a comfortable 19°C during the day and around 6°C, at night. If you’d like to tick a monastery off your travel list, the tiny yet serene Lachung Gompa is easily accessible.

As you leave Gangtok for Lachung, be prepared for Sikkim’s October scenery. You will pass blue mountain springs, cascading waterfalls, the powerful Teesta and trees with golden leaves, on the way. Yumthang Valley(11,800ft), 90 minutes from Lachung, is a must for its natural splendour that is at its best in October. The dark alpine trees and towering mountains are perfectly juxtaposed against the speckled-blue sky. October is also the perfect time for a dip in a natural hot spring, Yumthang Tsachu.

At 15,000ft, Zero Point is the confluence of three rivers with snow-clad mountains all around. An October visit offers great visibility and even though the 23km road (from Yumthang) is bumpy, the rewards far outweigh the journey.

West Sikkim’s biggest draw in October is the hill town of Pelling(7,200ft). About 130kms from Gangtok, Pelling has the perfect autumn weather(14-24°C) for exploration. 9kms from town is the important monastery of Pemayangtse. In October, one can view the Himalayan range that surrounds it after exploring the Buddhist sculptures and paintings of the gompa. The Rabdentse Ruins, 32kms from Pelling, are the melancholic yet beautiful remains of Sikkim’s ancient capital. Don’t forget Khecheopalri Lake, a mellow location that holds both religious and aesthetic significance. Trekkers visiting Sikkim in October should head straight to the western town of Yuksom(6,000ft). The ‘gateway to the Kanchenjunga’, Yuksom, 40kms from Pelling, is where a number of treks start. Whether you’re heading to the Kanchenjunga Base Camp or Dzongri and Goech La, Yuksom is where you need to be in autumn.

The Mellow Sights of South Sikkim Namchi, capital of Sikkim’s southern district, 80kms from Gangtok, comes alive in autumn with panoramic views and untouched vegetation. For those who prefer a slightly warmer climate, the mercury doesn’t drop below 15°C. Samdruptse Hill(7,000ft) is a major attraction with the 138ft Padmasambhava statue that sits majestically in the slanting sunlight and autumnal breeze. If you’re keen on exploring Tibetan religious architecture, the Ngadak and Sherdup Choeling monasteries are in Namchi. The southern Sikkim town of Ravangla(70kms from Gangtok) is a popular autumn destination because of its proximity to the Himalayas. A hike to Maenam Hill is a must for those who want to photograph the mountain ranges; Ralang Monastery is a beautiful destination during the crisp days of October. 26kms from town is the sprawling Maenam Wildlife Sanctuary, where you can get a glimpse of Sikkimese flora and fauna in their natural habitat.

The most important festival in October celebrated by the Nepalese is Dashain(Durga Puja). A fifteen day festival that involves religious ceremonies and auspicious customs, making it a wonderful spectacle for the autumn traveller.

The October days in Sikkim are crisp and perfect. The gracefulness of autumn can really heighten your holiday experience in this north-east state.