A scenic view of the snow-capped mighty Himalayas while enjoying the cool breeze with a cup of hot tea, an experience you should indulge in!

Popularly known as the lonely planet, Gangtok, the capital city of Sikkim is at its beautiful best during the snowfall season. A visit to this city in the month of January gives you the chance to not only experience the serene weather but also creates an opportunity for you to enjoy fun-filled activities that are best exercised in the winters. Though the city of Gangtok remains beautiful during all seasons, it displays its magical white beauty in the month of January. The temperature in Gangtok during January ranges in between 4 to 7 degree Celsius, so make sure you carry more warm clothes to keep away the cold.

This beautiful city in North East India is a hideout for those that seek peace, a paradise for adventure lovers and a vivid cultural fusion for those that wish to explore.

How to Reach Gangtok The city of Gangtok is accessible by air, train and road. If you have time constraints and wish to reach Gangtok by the fastest means, then you should book a flight ticket to Bagdodra airport in West Bengal. This is the nearest airport to the city. Once you arrive at Bagdodra airport, you can either take a taxi ride or helicopter ride to Gangtok. Besides the Bagdodra airport, Sikkim’s newly launched Pakyong Airport close to Gangtok can also be booked. But keep in mind, that not all commercial airports arrive at Pakyong so ensure you check before booking your flight ticket.

Distance journey are best spend in trains isn’t it? There is so much that one gets to enjoy while on a train journey. So if you wish to land into Sikkim via train then book a ticket to New Jalpaiguri Railway Station in Siliguri. Once you arrive here, you can take a bus or taxi drive to Gangtok. For those that enjoy stopping by scenic location and enjoy travelling by road, you can either book a car or self-drive to the capital city, Gangtok.

Experience the diversity of Sikkim in Gangtok’s Winter Festival This is a festival hosted by the Tourism Department of Sikkim. The festival begins in December and lasts up to mid-January. During this festival, the residents from all across the state of Sikkim dance to the tuned of folk songs and display the rich culture that the state is adorned with. They also prepare authentic delicacies for visitors to relish. The entire city of Gangtok is lit up with candles and different coloured lights. The lively streets, lip-smacking delicacies and cultural shows are a treat you should indulge in here.

Despite the cold weather, the fun continues in Gangtok. The month of January also hosts the celebration of Maghey Sankranti. Every district, town and city of Sikkim celebrate this festival with pomp and enthusiasm. Though this a festival is popularly celebrated among the Hindus, the entire state of Sikkim participates to make this celebration a success. During this festival, fairs, exhibitions and mela are held in different parts of Gangtok.

Popularly known as Sonam Losar, this is a celebration of a new era, year or beginning among the Tamang community in Sikkim. During this festival, houses are painted with new colours, monasteries perform mask dance, and people perform ceremonial rituals in monasteries. Since it marks a new beginning, people also dress in new clothes and decorate the surroundings with new items. It is one of the most popular occasion celebrated with music, lights and good food. The capital city, Gangtok welcomes this celebration with grandeur.

The city of Gangtok is adorned with the different wonders of Nature. Every nook and corner in the city is a masterpiece, a display of the beauty that nature is. It is untampered, unexplored and located on the quiet hills. There is so much to do in this small city from adventure to calm peaceful walks. And though the month of January sometime gets ‘spine-wrecking’ cold, the different activities bring in a sense of warmth.

You can take part in a crazy ride in cable car of Gangtok. Though the weather will you pull you to comfortably rest under the blanket in your cozy room. Step out and enjoy the mesmerising view of the entire city. The zig-zag ride from one end of the city to the other will get your adrenaline rushing and thus kicking away the thoughts of ‘how cold’ the weather is. Not only will you get the chance to view Gangtok from above but experience the breath taking view of the Himalayas. The thrilling experience that you get to enjoy while on the cable car is one you must endure while in Gangtok. For those that enjoy adventure, mountain biking is also an option in Gangtok. The rocky paths offer a lot of thrill to those that wish for fun amidst the chilly ambience. It offers travellers the chance to get a closer view of the beautiful nature that Gangtok has. The narrow paths, valleys and plantations that you cross as you journey on the slopes of Gangtok will bring in memories worth cherishing forever. And if you are in Gangtok during the month of January, mountain biking is a great idea as the cold weather soothes this fun-filled activity. 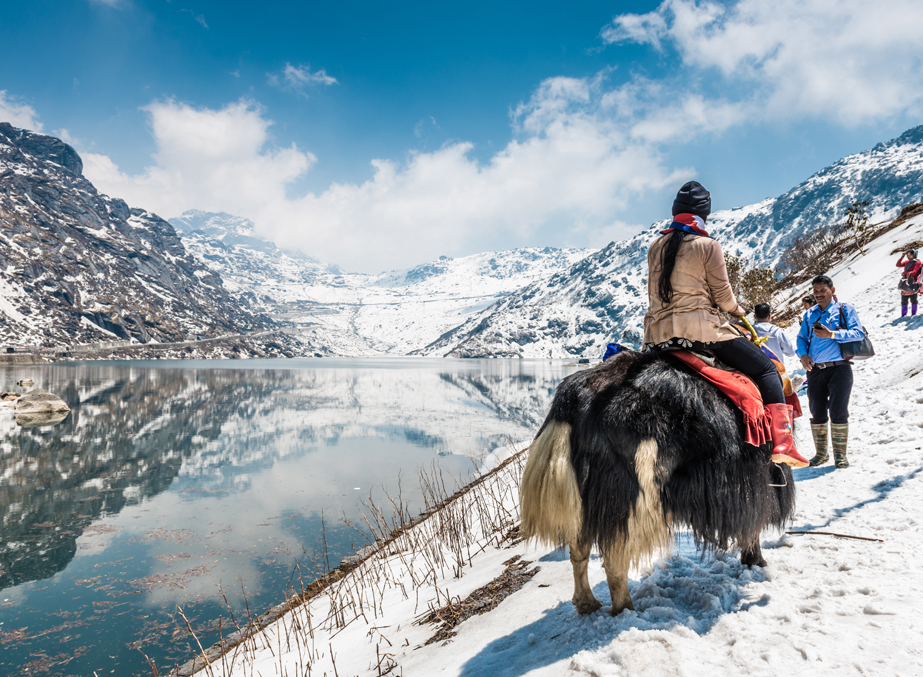 A session of unwinding in Tsomgo Lake is also a must during the month of January. The lake is frozen and the surrounding snow-capped mountains are mesmerizing. You can spend some memorable time here amidst nature as you enjoy the ‘scenicity’. Also, hop on for Yak ride and pay a visit to Nathula Pass.

Since January is one of the coldest month in Gangtok, the hills display its other beauty. The city is less green and, more white, the lakes are frozen and extreme adventure sports are on halt. But what remains constant is a hot cup of tea in a café in MG Marg. You can walk the brightly lit street of MG Marg and hop into the cafes and malls for a cozy, comfortable evening. Win over the winters of Gangtok with some hot freshly brewed beverages.

Whatever the season, Sikkim remains beautiful but there is aura innate to the state of Sikkim that is displayed during the month of January. So go ahead book a stay, and experience the chilly weather of Gangtok in January.